‘It makes increasingly less sense even to talk about a publishing industry, because the core problem publishing solves—the incredible difficulty, complexity, and expense of making something available to the public—has stopped being a problem.’ (Clay Shirky, ‘Newspapers and Thinking the Unthinkable’, http://www.shirky.com/weblog/2009/03/newspapers-and-thinking-the-unthinkable/). Are digital and networked media dismantling the “publishing industry”? Is it being replaced? If so, what is replacing it? If not, what is the publishing industry becoming, and how is it doing so? Are there new difficulties and complexities or expenses involved?

Firstly, the incredible difficulty can be geographic and demographic limit. Print publishing can only sell their product in limit area and for limit target audience. For example, The Sydney Morning Herald is publishing in Sydney for local people and it is unlikely to buy it in other cities or countries. Some Australians who live in other counties cannot buy ‘The Sydney Morning Herald’ and know about what happen to their own city or country, whereas, the overseas people who live in Sydney can only buy the local newspaper and cannot read the newspaper publishing from their own country.

Secondly, complexity is one of the problems because the print publishing industry is combined with various parts where it needs many specific physical tools, like, printer, ink, paper and storage, and also technical workers. Also, the print publishing industry needs to print out the hard copies one by one with single machine which is time consuming. Moreover, many procedures need to be completed, such as, research, contribution and proofreading, before the typographer can print out the final version of newspaper. Additionally, it is hard to alter any content in print because all of the procedures need to complete it over again. Therefore, print publishing industry should be strict with accuracy.

Thirdly, the expense of print publishing is more than online publishing because print publishing industry includes many elements where each of them cost much. For instance, the rent of the company’s office and the storage for putting the hard copies print, delivery cost, cost of the printing machine and hire of technical workers.

Three of above issues have been solved when the effects of the rapid development of technologies on publishing come out. From the print to online, the occupations and roles involved are diverse and numerous. Whether a journalist, magazine editor or advertising executive, multimedia formats signify the industry is at an exciting time and subject to express transform.

Are digital and networked media dismantling the “publishing industry”?

Digital and networked media have not entirely dismantled the “publishing industry”, however, it is no doubt that it has dismantled in a certain level.

According to the idea from the theorist, ‘DeLanda’, publishing industry can be an example of assemblage. DeLanda mention that entities do not everlastingly belong in single network, but diverse platforms can be applied when its character and belongings are taking with.

As the publishers and the audience are reattaching and separating themselves to the various environments and keeping all of its belongings, the human and non-human actants that are involved in the “publishing industry”, like, journalists or magazine editor, and can be found alike in the digital and networked media. The capacity of being various and being connective to digital and networked media has indicated in this expansion of traditional media.

However, lot of insufficiency still exists in traditional media when it compare with the contemporary media, digital and networked media.

Publishing industry assemblage can also be said as a network of publishing and distribution stimulated by how publishing affected by public, the use of technology, and the mode in which content can be issued.

In publishing industry, print-journalism can be a good example to be focus on and study in this digital revolution. Along with the transformation to online journalism, the approach in which digital and network media are dismantling the traditional publishing industry can be probed into both specifically, and in general.

The Internet Technologies writer, ‘Clay Shirky’, states that “If you want to know why newspapers are in such trouble, the most salient fact is this: Printing presses are terrifically expensive to set up and to run”.

Evidently, Digital and networked media can reach widely audience without time or location limited. The audience can search, read, download or save any global news or information whenever they like, even the content are published in other counties far from their current locality. It is what the print-journalism do not able to reach it.

Multi-media platform is the emphasis of digital and networked media where mass of platform had been formed constantly, such as, YouTube, Tumblr, Blogspot and Facebook. It has created the vast space to public for comment, share, connect and discuss. Interconnection between the publisher and viewer is significant to journalism in which latest information can be passing through everyone.

Obviously, print-journalism can only produce stated quantity per day and the forms of content are also fewer than digital and networked media. News and information can be released as much as you can in networked media. Various form of content are able to publish in internet, like, text, image, video, sound or animation. There are no conditions in which form you should use, even from single sentence to voluminous text, all content are able to distribute via internet.

According to the Actor Network Theory from the French thinker, ‘Bruno Latour’, he mentioned that all relations and elements, even human or non-human actants in the network, should be treated equally and all of the elements should have equal agency. He also states that all elements are playing their own role but related to each others in an assemblage, so that, the relation will changes respectively when one element change or it will created a new form of assemblage (any-space-whatever, 2010).

Therefore, the “publishing industry” has been dismantled in a certain level by the digital and networked media in which the internet and new age advances perceives its conversion is booming to the publishing industry.

Is it being replaced?

In current society, everything are rapid developed and it is hard to distinguish where the old ends and the new begins, especially, in the aspect of “publishing industry”. Therefore, traditional media is not totally replaced by the digital and networked media.

“The problem newspapers face isn’t that they didn’t see the internet coming, they figured out early on that they needed a plan to deal with it, and during the early 90s they came up with not just one plan but several.” quote from (Clay Shirky, 2009).

Print-journalism is not waiting for replaced by the new media but constantly to upgrade and strengthen for facing the new media. There are two plans, even is not efficiency, print-journalism has trying to deal with new media which has mentioned by ‘Clay Shirky’. “One was to partner with companies like America Online, a fast-growing subscription service that was less chaotic than the open internet. Another plan was to educate the public about the behaviors required of them by copyright law. New payment models such as micropayments were proposed.” (Clay Shirky, 2009).

‘Paywall’ is a way developed by newspaper industry to sustain their business. ‘Paywall’ refers to the system of online newspaper that partial news will provide to public in free, but to get further valuable and accountable news, audience should pay for them. ‘Paywall’ is advocated by ‘The New York times’ in which business can keep go on consistently. Also, ‘The New York times’ has recently announced that the estimated subscribers have reached 250,000 (Gillmor, 2011). This is the way in which newspaper can make profit and survive with large expense.

Due to the appearance of digital and networked media, a power transfer as these new platforms have the ability to affect and grasp more attention than ever before (Boyd, 2009). Digital and networked media is in fact dealing for more publishing to take place, whereas, traditional media sees that their extent is seen as limited and this one central source had relied originally by its readers.

It is obviously that accessing and publishing information is severely shifting, and some aspects is often perceived as a weakness, such as, a lack of high-quality journalism and the reduction of business in publishing. “Like likability, full archivability and full accessibility to archives is something that the traditional media lack totally. It is one of the most powerful features of online journalism.” This quote implies that online journalism is had more advantage than print-journalism in publishing industry (Prasad, 2009).

Apparently, the internet has reformed media distribution and reception that journalists need to alter the content to electronic form. The shift from print to digital facilitates news articles and journalistic content to reach wider audiences than the normal demographic. The style of distribute information via internet are still in needed of accuracy, because the news publishing via internet still need to be reliability and showing the quality to public.

In fact, everyone is turning to get the news via internet in which they are relied more on online news than newspaper. According to ‘OECD Publishing’, the newspaper market was expected to shrink by 10% in 2009 and amazedly the market has had zero growth since 2004. “Employment declines in the newspaper industry have been ongoing since 1997” (OECD Publishing).

The digital media are becoming more popular and common in contemporary society, yet a certain part of people, especially, older people, are still reading and buying newspaper every day. Even print circulation decreases, the print form is still surviving and didn’t replaced by digital and networked media.

Are there new difficulties and complexities or expenses involved?

The term “aggregation and distribution” in publishing can be said as self-publishing and connecting (Gauntlett, David, 2010). More people become “journalist” where they can distribute anything immediately and share it globally. Public can take the video or photo at any moment by using their electronic devices, such as, ‘smartphone’, and posted it on the network directly.

Therefore, this new mode of publishing formed new phenomenon in which the number of traditional journalist and the quality of news has declining. Public turns to read the news in a fast and easy accessible way even the information are not published by professional news writer, then, professional editing are become undesirable as before.

Because of the ease of publishing, message saturation has emerged. The expertise for gathering, filtering and organizing content are in needed in digital media, otherwise, information overlapping or overflow will cumber with the whole media archive.

Piracy is also raise frequently in digital media where the content exists in internet can be copy, download, forward or republish. Not much audience will care about the copyright.

Individual’s expenses are rose rapidly where they need to get the electronic device, especially, Smartphone, to cater for the digital age. And this increase will not lessen in future. Below is the graph from ‘IHS iSuppli’: 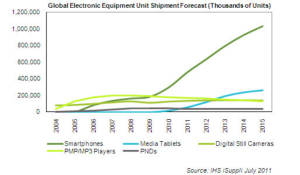 “Restructuring the ways in which information flows in modern society.” (Boyd, 2010) Creating a new way is what digital media benefits to society. Altering of social needs pattern opening to innovative occasion in our everyday life.

Competition between traditional media and digital and networked media for attention are ongoing. Therefore, it is hard to evaluating the modern media publishing landscape.